Ollanta In A Nutshell 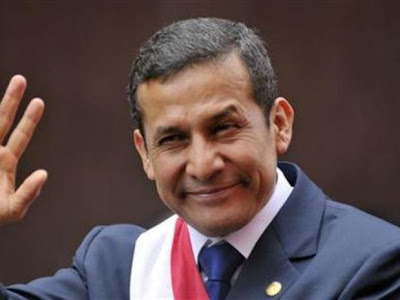 Ollanta Humala took office as the President of Peru in the middle of a cloud of doubts felt not only by his country fellow citizens, but by the international community as well; less than two years ago, he was a hard-line leftist. Now, one of the most important questions is if he will become an ally of Venezuelan president Hugo Chavez and, if he does, how far will he align to Chavez’ internationalism. Some time ago, he declared that the only way he would visit the Chilean city of Arica –on the other side of the border between Peru and Chile, would be only if he were riding a tank, making a reference to his desire to invade and reclaim Arica, the city that Peru lost to Chile in the 1879 War.

In 2008, while I was visiting Mazuko -a remote town in the Peruvian Amazon- a group of Humala’s supporters showed up in town wearing clothes that looked a lot like military uniforms. They gathered in public places calling attention to their nationalistic vision and selling “The Ollanta”, a self promoting newspaper. Although attendance to their public meetings was minimal, they told me they had been travelling through small and isolated villages for years.

The family of Ollanta Humala is quite unique, even under Peru’s standards, where the bizarre is normal. His father, Isaac, leads an ethno-national movement, graphically represented by symbols disturbingly similar to those of the Nazis. His brother, Antauro, attempted two coup d´etats, and is now in jail for the death of a policeman during the last coup d’etat. Currently, the Supreme Court is studying an appeal to commute his 25 years sentence for house arrest.

The arrival of Humala to the presidency of Peru follows the traditional and famous unpredictability of that country, where “nothing is impossible”, as a famous Peruvian saying goes. An example of this unpredictability was his dramatic conversion from a left-nationalist into a moderate social democrat just a few months before the presidential election; this allowed him to become the president. All of this is known history; what is yet more important is to be able to predict Humala’s actions in order to anticipate what kind of president will he be, as well as the results for the Peruvian economy and its international relations.

Inside Peru, Humala faces strong pressure to raise taxes to big corporations, and to increase public spending. This pressure will add up creating an intricate problem-mesh that will become more dense and difficult to solve as it grows in size, in the long term. However, from a political perspective, the same circumstance may benefit him on a day-to-day basis because he was elected under the premise of distribute the wealth to the poor taking money from corporations, this is a mandatory obligation he has to fullfill. (Necesitas explicar el porque dices la ultima frase –en rojo- porque no se puede afirmar una generalidad, en un paper, sin explicar la razon).

Currenty, Peru is one of the fastest growing economies in the world, and perhaps is better suited than most to withstand a time of crisis due its rich natural resources as gold, whose demand increases in time of crisis and coca crops who are fairly is independent on world economic situation. Even in worst situations as the late 80s terrorism crisis, informal economy in Peru has remained strong and healty. (lo mismo que mas arriba, necesitas citar numeros o algo que concrete tu idea, en forma breve).. But the Peruvian electorate is fickle and demanding, and to maintain his popularity, Humala will be obliged to approve policies that will curb down investment and impoverish the country’s treasury.

With Ollanta the formal economy probably will slow, but much of the wealth of Peru is informal, as the production of gold and cocaine, two products that can withstand any financial crash, which independence on large investors and immune to any government policies .

In My view, the Ollanta Humala is an ambitious, intelligent, adaptable and very realistic guy. I do not think he held rigid principles, nor a fanatic willing to perish himself for a cause. He has always behaved strategic driven by objectives instead principles, that is how he became President. Its main objective is power, and he will do everything necessary to maintain its domestic popularity to sustain his own power. That is why I guess he likely will maintain a distant relationship with Chavez, if it perceives too involved can hurt his political image. He will almost certainly buy weapons and equipment for the Peruvian Armed Forces, in large quantities, because Peru is rather weak nowadays. It is also almost certain that frictions and hostile statements occur frequently between Peruvian and Chilean officers, because that brings profit to any politician in Peru and Ollanta Peruvian will need lots of popularity. However as he is a realistic politician, the most likely is that all dissolves only in bitter statements, war or skirmish is virtually impossible in the region.

I think that great times are coming for Peru, mostly for the informal economy and probably the official figures for growth and foreign investment will slow down and things will worse for big corporations compared with the years past. Anyway in Peru, “everything is possible” as is one of the more difficult places to make predictions in the world.
Posted by Tomas Bradanovic at 9:28 PM