Why Students and Teachers are Striking in Chile 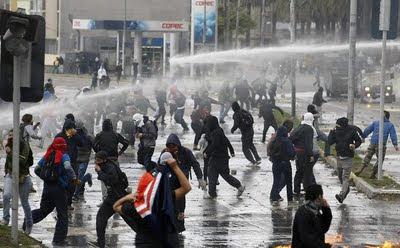 In 1981, Chile changed the educational system, big time. This structural reform was aimed at decentralization, more competition, ending entry barriers and cost efficiency. Teachers were no longer civil servants of the Ministry of Education. Municipal education bureaus were created for primary and secondary schools, which had to compete with private schools receiving the same government grants for each student served. It also opened the possibility of creating new private universities with few requirements and state universities had to compete with them under conditions of self-financing.

The system gave interesting results, but was far from perfect, because some of the designed institutions barely met the efficiency requirements that they were expected to achieve. The biggest failure was municipal education because municipalities have been chronically inefficient in managing primary and high schools. Every year they lost enrollment, compared with private subsidized schools that are also free. When a school looks dirty, dilapidated with broken glass, and on strike, it will most likely be administered by a municipality.

Nevertheless, the reform also brought great advantages over the old system centralized in the Ministry of Education. In 1981 there were 8 universities in Chile and only 2 out of 10 secondary school graduates could enter university. There are now 179 higher education institutions: 59 universities, 43 professional institutes and 77 technical training centers, and 5 out of 10 graduates now entering middle school to a university. The old dream of “college for all”, the revolutionary slogan in 1967, was fulfilled in the most unexpected way: the private way.

After the military rule, during the 18 years of center-left governments, Chile did not attempt to change the reforms introduced in 1981. On the contrary, the system of subsidies was strengthened, and although they closed the door to the creation of new private colleges, they maintained the principle of self-funded state universities that compete on equal terms with private ones.

As I recall, since the return to democracy in 1990, each year there have been two major strikes in Chile: the public employees and students are as predictable as rain in winter. Strikes are sometimes stronger and sometimes weaker, but it is rare to spend a year without two strikes. Behind the strikes of students is always the claim to re-nationalize education, which is in the corporate interest of the teachers who want to go back to being public servants. It also eliminates competition from private education that is killing them. Students are only the instruments, as they are always ready to go on strike for any reason as long as they miss classes. It is a well established Chilean tradition.

Full education coverage has succeeded with primary 99.7% enrollment and 87.7% secondary education enrollment. However, It has had the paradoxical effect that completing secondary education now is not valuable for finding a job. Several studies have shown that there is little advantage to having a high school diploma. In the future, as university education comes to the masses, it is likely that professional qualifications will also start to lose value.

The problem comes when politicians began to assert the theory that if education was a tool to improve income, making it general could achieve greater social equality. This concept of egalitarian education led to higher levels of demand, and now to have a professional degree does not distinguish someone for their expertise. Education as a tool for egalitarianism is a contradiction since it does not take into account that people educate to differentiate themselves from others, not to be equal to them.

In Chile today, almost all our young people have completed secondary education and this does not qualify them at all to earn a living. Almost half are admitted to college, and as the demands are relatively low, many leave with diplomas, but without special skills needed to make a living. They also have to pay or borrow for a quite expensive education because of waste in state universities or the race for the prestigious private schools. Having finally obtained a diploma, this doesn’t make any difference because everyone gets one, even stupid people. If we add all these conditions, plus the corporate interests of the teachers, who dream of going back to being public servants not having to compete with more efficient private teachers, explains why each year, with the same regularity as the rainfall, Chile has a student and teachers strike.
Posted by Tomas Bradanovic at 9:19 PM