The trap of a confortable life 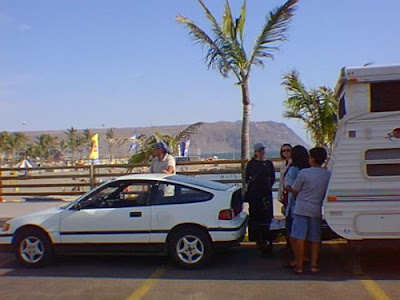 Time ago I met a guy which I met in the eigthies, when I was poor. He rented a bigger room than mine and worked as mailman, I remember him about my age, married with a big woman and his finances was far better than mine; paycheck assured every month with no problem to finance room and food, much more than I obtained with sporadic jobs (when I can get one).

Well, the fact is that he recognized me inmediatly, for me was hard to recognize him, he seemed a very old man with holes instead of front theets, he explained me that he was working as junior, cleaning and carrying cases in a shipment office. He was very impressed to see me driving my own car and I cannot convince him that I was not into drug traffiking, for him it was no other logical explanation for Mr. "zero pesos" that he met in the eigthies now had a car to drive, and a truck also.

This made me think how lucky -at least in fiancial terms- I was since those hard times, It is true that I live now with few money but my economic progress was amazing: years ago no one gave a cent for my future, my natural place in this word was -with luck- to be a mailman or a junior same as my friend, working hard like a trained monkey for a couple of bucks every month. Now I see all those people which I lived in the eighties and all of them are in the same misery as before.

So, if some young people who is starting his own figth for existence is reading that I will give him this good advice for free: never look for a confortable life, this is the worst trap. If you like take it, if not leave it.
Posted by Tomas Bradanovic at 2:11 PM

Hola Tomas
My wife and I spent three months in 1989 living out of a tent in the altiplano. We had very little money but a lot of happiness, Today we live in Japan, big money but not a lot of happiness! We spent a lot of time at Baños de Jurasi just north of Putre, Baños de Chapaquiña just a few kilometers from Chapaquiña and at the not very hot hot springs near Ticnamar. Wonderful, my wife is Japanese and they really love hot springs. Tomas, you told me you were in Japan. Didn't you go to a Japanese hot spring? Anyway, we walked all over the altiplano from Putre to Guallatire, Salar de Surire, Isluga, Colchane and down to Huara. Yes, I have always been happier when I had less but somehow as I got older I began to feel I need this and that and now I am slowly tring to live with less. I got married in Chile, in Santiago, and we had a great party with so many Chileans. We can't forget Chile because we met so many great people. My wife always tells me "ok, ok John, only six more years and you can return to you beloved Chile" It's nice to have a dream for the future. Life is wonderful. My email address is chile1@mbox.kyoto-inet.or.jp If you know some gringos who would like to communicate with me, I'm happy to be of service.
Hasta luego
John

John, when I was in Tokyo (just one week) I had no time for nothing except to work like a dog, I published my bizarre adventures at
http://www.bradanovic.cl/cronicasdeviaje.html
(in spanish, sorry), well, after the workhours my japanese friends headed to a lot of bars in Shijuku District, my memories are not too clear anyway!

I see you are a seasoned traveller and you knew well Chile and altiplano, well, I thank you very much for your offer to contact peopel who is planning to come to Arica, I know a couple of friends who are doing so and I will send your mail adderss, nothing best than the direct experience.

Take care and see you in Arica someday!