To live with style 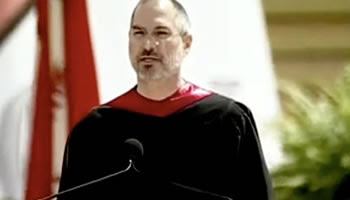 I was reading the Steve Jobs speech to Stanford graduates, thinking that surely those words will be very popular in the future. Every certain time an impressive speech or piece of writing appears amazing people and remaining as inspiration for years to come.

This happened with Churchill speechs, the Macarthur farewell, Luther King, Lincoln and many others in the past. Now Steve Jobs with simple and clear words talked to graduates about his own story, his shinning times and cloudly times.

As most of motivational adress Jobs told a lot of obvious things, so obvious that we rarely are aware of them: the importance to do which we like most, to be able to stand up after the fall, how important may sometimes become some insignificat things as calligraph, and the onminous reality of our death.

But besides to be a good piece of text, which I liked most of the speech was the fact that Jobs itself cannot be considered as a winner in the traditional sense. He does a lot of bad moves and mistakes, under his first ruling Apple was close to bankrupt and most of his long term strategy finally was far from good.

Compared with Gates, Steve Jobs achievements are not so impressing, however he has always exited the imagination of people and has harvested consistently a lot enthusiatic followers. Steve Jobs is a happy guy with a great ability to transmit enthusiasm. He is a real champion despite the fact that Bill Gates has defeated him, same as Muhammad Ali was still the champion after Foreman made it bit the dust after broking his jaw.

So ¿what is my moral?, I think that the achievemnts are not the esential, any asshole with a little luck -or some skill- may obtain a big achievement, but to live with style and be consistent with your own beliefs is a very different matter. Not any asshole can do that, no way.
Posted by Tomas Bradanovic at 11:17 AM

Achievement is something very relative.
For some people achievement is the same as having recognition and making money.
For others, me included in this second group, is setting your own goals and getting there for your own satisfaction.
A friend of mine, for instance, is a genius in electronics and, despite that, he quit a big company that was paying him a lot and got himself a job that pays him much less but let’s him have a lot of free time.
Why? He has two little kids and he says he wants to be near them while they grow. He is obviously not getting rich. Every thing in life is made of choices and bets...

True, when people measures achievement in material terms do not realize that even the most stupid may win the bigpot in lottery or any luky strike equivalent in business, not a big deal.

But be able to live taking his own choices, following his own rules and been reasonabily happy, that is great!