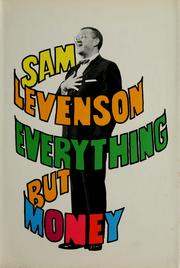 I read it many years ago at Reader´s Digest. It is the story -autobiography- of a kid raised in a jew´s neighborhood of New York City in the twenties -when most of jews in America was still poor- I dont remember detais of the story but I never forgot the lead "in those years in which we had everyting but money".

While I read, it reminded my own chilhood, into a split family -it was just me and mom- and during many years we had also everything but money. Despite we was falling every year more deep in poverty she never lost the enthusiasm, unconcern about the future and good humor. "Well, God will provide us" she used to say, but she was an atheist and God rarely provided us, except for just enough to keep our mounths out of the water.

Anyway between 4 to 13 years old it was the greatest time of my life, full of odd situations and adventures of any kind. My mother never accepted that we was poor, she lived instead as a queen in the exile, enjoying the pintoresque faces of the poverty.

And that is why I grew with no fear to live without money, just doing what I wish and hesitant to make sacrifices or surrends to obtain "security". I am not sure if this is good or not but to me it works quite well, I have never made fortune but my life is reasonably happy, relaxed and i got a lot of adventures to remember. The fear of poverty is a fuel that I have not at all. I try to live with small material resources, avoid sacrifices, and dont worry about the future.

What the future will bring me? Well, death for sure. Not even the frozed Walt Disney was able to avoid it, so I try to spend the time who is left to me, same as when I was a kid, with everything but money and disregard about the future. And if some day I found a pot full of gold coins in my yard... well, I guess I will not get mad, life oblied us to make sacrifices, sometimes.
Posted by Tomas Bradanovic at 6:10 PM