Living in the border 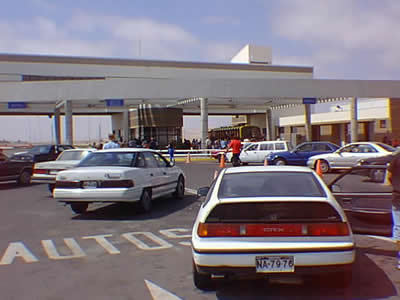 Arica has had bad press. It often appears in the national news as an example of economic depression, or due to a corruption scandal, or offenses related to smuggling or drug trafficking. Arica is also talk from time to time by the mega tsunami that can devastate the city at any time.

Sometimes a bad reputation is a good thing, perhaps because of that Arica population has remained stable at around 180,000 inhabitants in the last 20 years, which can be seen as a tragedy for those who believe in economies of scale as key to prosperity, but is very close to what Schumacher, in his book "Small is Beautiful", considered the perfect size for a city at human scale.

Arica is undoubtedly one of the weirdest cities of Chile, in just over an hour away and paying $ 4 -the same cost as a local taxi into the city- there are buses to Tacna in Peru, because the border is just 30 kilometers away. You can go to Peru, where nearly everything is cheaper, lunch, buy liquor and cigarettes without tax and return, all in a few hours.

The city is small enough to move on foot everywhere. They work the same amount of hours as the rest of Chile but differently distributed. In summer, many clerks or salespeople go to their jobs with a bathing suit under their regular suits or dresses. At 1:00 P.M. everything is closed and people are going to lunch at his house or go to the beach until 3:30 PM, then they dress again and return to work. From 1:00 P.M. to 4:00 P.M. Arica is like a ghost town: it´s nap time. In contrast, everything is open at least up 9:00 PM.

But not all is wine and roses. Many people hate any kind of work and effort, they are not too interested in doing things right but to make it easy. It is rare to find workaholics willing to make money here. Everyone seems to be more or less satisfied with their current situation. Money is not a strong incentive here so things seldom change. Arica may be quite boring and frozen in time.

As the population has remained stable for many years, most people knows who is who. Social differences are few because there schools and neighborhoods are not clearly segregated: for the same generation, whealty and poor people has been often mate in the school or university. The most ambitious or social climbers usually migrate to Santiago or other larger cities.

Arica is very particular, as a border town is both a Chilean and a little bit Peruvian. It is not a city for all kinds of people: those who are ambitious, who like speed or make things happen, will live in despair in Arica, where everything moves at geological speed. But those seeking a relaxed lifestyle in a boring place with perfect weather, Arica may be a perfect place to live.
Posted by Tomas Bradanovic at 11:47 AM

Hi Tomas
Well, my impression of Arica is that Arica is a beautiful city with great public beaches, markets, and restaurants. There is more of course; the Chilean culture promotes an atmosphere of relaxation and sociability. I could go on for much longer but that will have to be at another time. Thank you Tomas for making such a great effort to promote Arica in English for those who cannot speak or read Spanish.
Take care
John in Kapaqn

Hello John,
Yea, in my view there are pluses and minuses, Arica may be not a very exiting place to visit, but is a good place to stay for certain kind of people, easy goers, relaxed as you say, maybe lazy!. As I am this kind of person, sometimes it seems I am advertising Arica, but I am not ;) just trying to help for those who come here or need to know (in english) a little about the place (Kapaqn is in Indonesia rigth?)

Hello there! Do you use Twitter? I'd like to follow you if that would be ok. I'm definitely enjoying your
blog and look forward to new updates.
Also see my website: Go to site

Oh, oh, I just released this comment from the "spam" folder, it deserved to appear here.

And if I ever have lots of money as to go London I will remember you ;)

Ah @tombrad2, you can spam my twitter also, no problem

The last time I've visited your blog is if my memory is good may be seven years ago, for me Arica is still the best for me. All the Pacific OCEAN in front of you (fresh and healthy air), the modern and small city in the middle and the great desert behind. Oh! I forget the Heavens sky above (best for observing constellations and planets for astronomy)
Yan from PARIS, FRANCE

Hello Yan, I think I remember we was not able to meet this time, I had some problem :(

Well, I also love my tiny town, may have not too much "ohhh´s!" for tourists but it is a small and pleasant place to live, easy going, with lot of small natural beauties and excellent climate.

Saludos from North of Chile! :)

Dear Mr.Thomas.I am planning to move to Arica but I am wondering Arica has pollen allergies because I am living in Concepción and I got pollen allergy. Thank you very much.

Hello Phuong
Well, to speak frankly Arica is not a good place for allergies. There are lot of sand in the air because the desert and a friend of mine who is alergic suffers every year with this. Anyway allergies tend to be very specific, probably the only way to know fo sure is spend some time here, you my be not affected by sand