September 11 and "no al lucro" 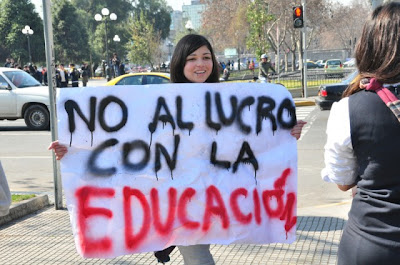 (Published in the online edition of I Love Chile)
September 11 still divides opinion in Chile. 38 years after the coup few people knows how it was Chile in 1973, I remember well those years when I was a 18 years old Allende´s supporter. Unidad Popular was a weird attempt to turn on socialism within the democratic system, and I think that the figures who follow demonstrate why it was a failed experience, and why some of those policies may not be replicated as some people is advocating now.

The first year of the Allende government was devoted to setting prices to below production costs, duplicate salaries (teachers received a bonus equivalent to four months' salary), to increase the amount of government employees and to acelerate the agrarian reform, expelling the land owners and replacing them with peasant committees. The result was that Chile, which normally imported about 140 million dollars in food, in 1973 had to import over 700 million, leaving the state without dollars reserve and the country without food.

In early 1973 the government's economic committee reported that 34,000 small and medium business were taken over by the government, with a result similar to the agrarian reform: national production came close to disappearing. Not a single title of property was given to peasants nor ownership to workers of the business, they were used as a mean for the state to appropriate the productive system. With this combination of prices under cost, wages multiplied and productive system broke, in 1973 all goods began to disappear, we had notes: no bread, food nor anything, but all we had was lot of bills, it was the first major Inflation in Latin America.

In 1973 the economy had declined by 3.5% and the deficit of state factories was five billion dollars, equivalent to sales of copper, the main and almost only export of the country, for the past 7 years. The official inflation rate that year was 740% and the fiscal deficit was 50% of the national budget. The losses of state enterprises –at those years almost the half of national productive system- amounted to a full national budget and the Central Bank's reserves fell from 450 million to $ 3.5 million, foreign debt rose one million dollars a day. The balance of payments deficit was $ 885 million in 1973

Social housing was built by government´s CORVI, almost all health was served by the National Health Service, almost all colleges and universities was owned and administrated by the Ministry of Education. The housing deficit was huge and most of poor lived in "villas miseria" (eliminated decades ago), the infant and adult mortality was very high as well as infectious diseases, only one in ten secondary school graduates can study at universities.

“No al lucro” championed now by some leaders of students means, in practical terms, to come back to 1973 with the government in charge of more than half of national economic and teaching system. They never knew that, but still there are people who remember, we do not march nor throw stones but we are determined to prevent such huge step back.
Posted by Tomas Bradanovic at 8:09 AM