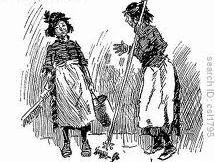 (Published in the online edition of I Love Chile)
Some time ago, talking with a friend -Chilean like me- about a gringo we met, he told me "he appears to be a lower class”. Well, I guess that "high class" in is a status reserved to celebrities, oil moguls and people like that. All others are working class and if you're a plumber, electrician or professor at a university doesn´t make big difference, unless you are a criminal or a poor inmigrant.

In is a bit different because your job determines sharply your social status. Some jobs are less “worthy” than others: a sergeant “worth less” than an elementary teacher. An elementary teacher “is” less than a dentist or an engineer, and so on. At the top of our social pyramid are the politicians, wealthy heirs, and, in general, all those who make lots of money doing nothing: those are our non plus ultra.
Jobs related with cleaning or serve are considered unworthy in . That explain why our quality of service is so bad: we hate to serve, jobs as waiters or salespeople are considered socially inferior and underpaid. It is not just funny but quite Freudian.
Formal education in is mostly a matter of status: a college degree has more value as a badge of status than as a proof of competence, no matter how great engineer you are, the important is if you graduated from an expensive university, which implies that you are coming from a “good family” and therefore trustworthy.
Even the most prominent left-wing politicians in are the ones that come from "good families" (note the language again, in “good” families’ means “rich” people). However, most of people in is not class conscious, our classism is unconscious and automatic, most of Chileans consider ourselves as “middle class”, some more “middle” than others just as in Orwell´s farm.
Classism is not so bad as it appears., it fulfils the psychological need to consider ourselves superior to others. In the social mobility is high. is a country of new riches and social climbers, our classism replaces our lack of true aristocracy. Rich families in seldom last more than three generations, so nobody takes too seriously the classist prejudices that we claim so often.
The good new is that racism –the other way to feel superior to others- is almost inexistent between us. Money talks in and a depreciated “” or “cholo” may turn into a king as soon as he got a good amount of money. Respect, a “decent” job and money march together in our materialistic country.
Posted by Tomas Bradanovic at 10:44 PM

Email ThisBlogThis!Share to TwitterShare to FacebookShare to Pinterest
Labels: classism

And literally nobody needs to fulfill a psychological need to feel superior to another.... That's more of an inferiority issue and those Fulkerson wouldn't last a day in a first world country not fulfilling their bottomless garbage egos (that are completely imaginary).

When I said "classism is not so bad as it appears" I dont mean that there is not classism in Chile, on the contrary I remark in my entry how relevant is classism in Chile, my point is that is not so "evil" or "bad" as is ussually considered, simply is an expression of a new money society, where big shots are usually first generation and try to mark distance with their humble origin.

In Chile money talks and mark a sort of social superiority, this may be seen as evil, but is not so evil, much, much worse is racism (very usual in "first world" countries, because you can arrange to make oney, but there is nothing to do to switch race: you are doomed by born.

Peru, to give an example different of America, is a very racistic country and a negro person, doesnt matter how rich he becomes never will be accepted in certain circles. If you are a chef and open a restaurant, your surname has to be Acurio or Shuller to succeed, that is why so many peruvian (black) chefs has to move to Chile to succeed, in Chile doesn matter the colour of your skin, just the weigth of your wallet, in this sense at least, we are a more meritocratic country